A wiki for RPG brainstorming and personal campaign management

Whisky in the Jar "Jar" Alleyborn 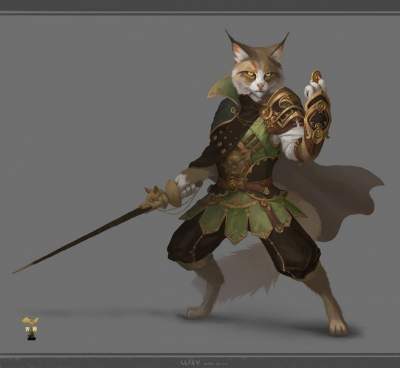 Whiskey in the Jar Alleyborn, commonly referred to as “Key” because the rest is just too damned long to say casually (so he has been told), is a Tabaxi born in this very city to a bar wench who couldn't turn down good coin. His favored lullaby was an old folk song called “Whisky in the Jar”, and he was named such. He grew up, like most of the poor children of the city, unsupervised on the streets with nothing but the desire for more than he had. And his favorite game was being a grifter, turning an ill-proffered bit of rubbish into another, slightly-less-rubbish thing he could then turn and trade up. He would do this until he was able to get enough coin to bring home and help his mom pay for bread. She was a good woman, a hard worker, and he wanted to make her proud of him, though perhaps he was less concerned with the how.(edited)

Growing up, he eventually turn to a smart business man, a getter-of-things, and eventually became a mantled knight for Waukeen, goddess of coin and commerce. To him, the 'rights' and 'wrongs' of the world were less important than making sure the whole system keeps chugging along. He never forgot his roots, and he's known for passing out coppers to urchins much like himself so long as they can provide a service. Can they make him laugh? Can they juggle? Can they tell him with the man with the big butcher knife is looking the other way? Real life skills they can hopefully put to good use, much like himself. His mother has since passed away to sickness, and he fills his days working for Thedius, as it is easy enough coin, and it allows him to ply his trade to a wider audience.

Except where otherwise noted, content on this wiki is licensed under the following license: CC Attribution 4.0 International