This is the placeholder for the main page for this campaign.

Legendary items are going to be not available for sale at all. Very Rare items will be needles in a haystack.

There are three separate pantheons in this world, with most worshippers choosing a single pantheon. The pantheons present are the:

pantheons. Norse is the predominant religion of Steepost with pockets of Greek and Egyptian. Ra's Jewel is near absolute 100% Egyptian and they actively persecute worshippers of other pantheons. So, when in Ra's Jewel…

The known world is thought to be on its 9th life as proclaimed by a Tabaxi prophet who claims that this will be the last without a major reconciliation of the gods and magic. In between each age has been a major trauma or cataclysm, causing complete political upheaval and fragmentation of written history and knowledge. What knowledge of past ages that does survive is hoarded by the elite and powerful. The common folk have little more than oral tradition passed down from generation to generation. The common though is that the world is about 500 years into the 9th life after giant earthquakes and volcanoes reshaped the land, redefined political borders, and buried once shining cities under flows of lava and soot.

This is the rough WIP idea for the world map. As of now, Ra's Jewel and Steepost are at the point of the red circle. I will likely flesh out this idea more when I have time to pick Kingdoms and do a bunch of labeling. 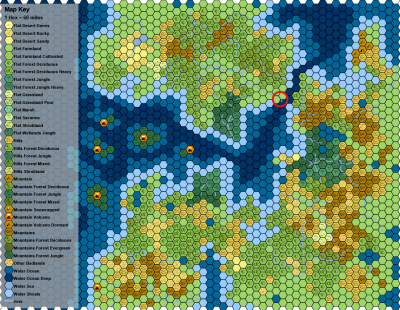 Map of Steepost and Ra's Jewel

TODO Clean this up